We have 150 guests and no members online 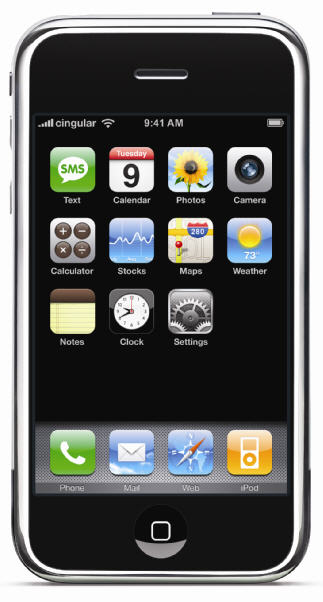 The iPhone alone is an amazing device. But it's the phenomenal App Store that's made the iPhone truly revolutionary, by giving thousands of independent developersthe ability extend and transform the device with their creativity.

Not even half a year old, the store has surpassed a milestone of 10,000 pieces of software available. Since the beginning, Wired.com has paid close attention to the gems that shine among the dross.

We've plucked out a list of 10 apps — from mapping software to musical instruments to games — that deserve applause for their quality, innovation and breakthrough achievements. Here they are — Jay Leno style — with our top pick at the very bottom.

10. Stanza
A book reader that grabs free titles from public domains, Stanza has soared in popularity — making the iPhone a worthy competitor to Amazon's Kindle. And if those free books aren't enough, Stanza recently expanded to incorporate a store to purchase commercial titles. The app did a good job pleasing Wired.com's Charlie Sorrel, who modified his Moleskine notebook so he could embed his iPod touch in it. (That way, he could read e-books at the cafe while exuding an aura of pretentious artiness, instead of pretentious geekiness.) Download Stanza (Free)

9. SayWhere
You get used to typing on the iPhone after some time, but punching in addresses to look up directions is by far the biggest drag. DialDirections was the first to introduce speech-recognition capabilities to the iPhone with SayWhere, which translates users' speech into queries for Google Maps, Yelp, Traffic or Yellow Pages. It's a nifty app, especially for keeping drivers' eyes on the road rather than the iPhone's virtual keyboard. Download SayWhere (Free)

8. Tweetie
Twitter, a new form of micro-blogging, became more legitimate when it broke the news of the deadly Mumbai attacks. And Tweetie is the best app we've found to follow your Twitter friends. The app neatly separates Twitter feeds into categories, and the interface resembles the bubbly iChat interface that most of us have come to love. It even lets you search Twitter and save those searches for later. A must-have for Twitterholics.  Download Tweetie ($3)

7. NetShare
This app is so cool you can't have it anymore. Nullriver's NetShare, an application that turns your iPhone into a wireless modem, disappeared from the App Store shortly after its release. Later, we learned Apple banned the app because NetShare violated AT&T's terms of service agreement. So only a lucky few (including some Wired.com staff) got the benefits of unlimited iPhone tethering, which normally costs about $30 a month, for a one-time price of $10. Bummer!

6. Shazam
Everyone's familiar with this scenario: You hear a really catchy, unfamiliar song on the radio and you have no idea what it's called. You hum it to yourself repeatedly and attempt to memorize the lyrics, only to forget it after slamming a few shots at the bar. Shazam will never leave you struggling to recollect these thoughts again: Hold the iPhone up to a speaker playing the unknown tune and the app will identify it — album, artist and song title — just like that. Download Shazam (Free)

5. Ocarina
The hottest music app in the App Store, Ocarina thought beyond the iPhone's touchscreen and found a unique way to use the handset's microphone. Blowing into the mic simulates the experience of tooting into a flute; you play around with four virtual "holes" on the screen to change the note. Ocarina users around the world can even hear what you're playing in a globe mode. It takes a while to get a hang of it, but Ocarina gives away just how creative iPhone apps can get so long as developers have enough imagination. Download Ocarina ($1)


4. TapTapRevenge
You'd have to be living on a different planet (or a retirement home) if you haven't heard of Guitar Hero, the game that gets players to twitch their fingers compulsively along with the beat of their favorite songs. Developer Tapulous took the same idea to make an extremely addictive rhythm game called Tap Tap Revenge. Tapping blinking lights on a screen to catch tunes isn't exactly the same as rocking out on plastic guitars and drum pads, but it's still highly addictive. And Tap Tap Revenge is so popular it's even offering the option to download new tracks to tap to, similar to Guitar Hero and Rock Band's music stores. Download TapTapRevenge (Free)

3. Trism
Trism is such an addictive and appealing game that it blessed its developer Steve Demeter with $250,000 in profit in just two months. And deservedly so, because the game's really well designed and plays something like a Bejeweled with an accelerometer to move around the puzzle pieces. It wouldn't be fair to call it one game, either: There are three different modes to keep you hooked. Download Trism ($3)

2. Pandora
Whoa whoa whoa — free downloaded music on a portable device? You don't say. Pandora's alternative music distribution made this happen, and the app is cool as hell on the iPhone. Add a station for an artist you like, and the app will play that artist's music as well as similar tunes you might like. What better way to find new music with the wealth of new bands out there? Download Pandora (Free)

1. Google Earth
When Steve Jobs called the iPhone "Your life in your pocket," he probably didn't expect Google to deliver the world in your pocket. Well, virtually. Displaying satellite imagery around the world in a 3-D globe, Google Earth is one of the most intense, mindblowing apps that truly shows off the powers of the iPhone. If you want to impress your grandmother with a demonstration of just how far technology has come since she was a girl, this ought to do the trick. Download Google Earth (Free)